November 17, 2013
Most people have it wrong about the last housing bubble. They blame the borrowers. But in fact, it was the banks who failed to do their jobs in determining how much house you could get .

But Dodd-Frank seeks to establish a rule whereby banks failing to properly underwrite a loan could result in those banks being sued by the borrowers.

We are so brainwashed that this avenue opening up for borrowers sounds preposterous, while we totally accept the patient's right to sue.

Unfortunately, while the banks will be required to stay out of toxic loans, this ability to sue will likely not be extended to shadow lenders, who did most of the damage in the housing bubble anyway.

Point is, if the Federal Reserve and the world's central banks want easy money, in order to fleece the populace, they will ultimately get that easy money.

Here is an article that shows help may be on the way regarding the regulation of the shadow banks, but don't hold your breath.

The article lists who the shadow banks really are. Once we see who they are, it turns out they are familiar characters that we didn't think could hurt the nation and the consumer. But they sure can do both:

Sivs played a big part in the financial meltdown. Here is a more complex article describing their function and harm to society.  What we can take away from the article in a nutshell is that securitization of these bad loans were transferred from the bank balance sheets to the market, and then much of the risk was transferred back to the banks themselves.

This froze interbank lending, and contagion began. Freezing interbank lending caused LIBOR to spike, and LIBOR rates exceeded the fixed swaps rate. When that happened, the entire banking system almost melted down because the big banks take the low interest rate floating side of a swap when they issue a loan to a customer. Here is a chart I put together that shows this very meltdown: 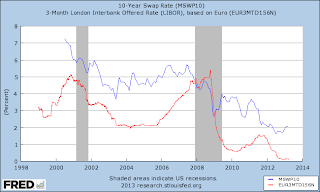 So, will there be another bout of easy money? Mike Whitney and others say yes. Certainly the big investors will want to unload the houses as they find being landlords over thousands upon thousands of houses will not be such a great bargain, and the money will be in selling the properties.

The only way this may not come about is if the plan to bundle up rents actually works. That is a plan that Blackstone is launching with a large bank. That could result in massive hoarding of houses and then what? No one knows.

When a house becomes a commodity instead of a place of shelter, all hell can break loose. And we may not be beyond more hell at this point in time.