Showing posts from December, 2013
Show all

Hollywood Knows Sandy Hook Is a Hoax. Speak Out Tinseltown!

We know you, Hollywood, are controlled by many powerful Zionist interests. Hollywood, it is hard for you to speak up about the evils of gun control, and the weakening of America that could come from gun control.

Keep in mind, Hollywood, that the weakening of America by any means is a part of the Yinon Zionist plan. Israel Shahak, a Jewish hero, said that this Yinon aggression could result in a backlash against all Jews, innocent in their non support of militant Zionism. I wrote about this subject and about Shahak on Amazon in the ebook and audiobook entitled Anglo-American Empire, Regime Change and the Ambition of Israel.

A Wildlife Ranger Shed Real Tears about the Elephants and Rino's, Not Like Sandy Hook Actors

December 25, 2013
I was watching a program today with the royal family, which is the figurehead of financial evils in the Square Mile, and watched elephants and rhino's beign slaughtered.

First, there is enough money around the wealthy to stop this evil killing for tusks, but the will isn't there.

Anyway, the rhino walking around without his horn was heartbreaking and he would eventually die. It was cruel and it was evil.

But the wildlife ranger in his love for animals shed real tears, and cried his eyes red. Robbie Parker of Sandy Hook could not do that for a child he lost 30 hours earlier, which of course means he lost no child 30 hours earlier.

Just like the killing of animals unjustly in Africa, the false flags and hoaxes against the United States by British, US and Israeli Zionist interests is cruel and unjust.

The fake tears of all these actors and actresses are compared to the real tears of a Ranger who loved his animals and could not stand the pain of seeing them brutalized.

Best Christmas Present: Stay Out of Debt So Sales Are Way Down in 2013

December 25, 2013
Bitcoin is not the Edison dollar, but rather is a global currency that could, down the line, play into the plans of the international banksters for a new world order currency. They virtually have a new financial order now, but this currency would certainly solidify that position.

So, Bitcoin could be actually unpatriotic. Our institutions mean something. They would mean less if we had a world currency. All the rule of law that we have, however imperfect it has become, would be even more threatened in a world currency system, with Bitcoin as the central currency.

This is what the bankers want. They want total control, and you could not even have access to cash with Bitcoin.

The banksters are desperate to insert language into Dodd-Frank that will force taxpayers to pick up their losses when they can't make a profit with reckless gambling. This should be stopped.
Post a Comment
Read more

This activism has Israel running scared, and seeking Jewish, rather Zionist, communities to flourish in the USA since the traditional Jewish kids are sick of the occupation of the Palestinians.
Post a Comment
Read more

This is the Definitive Video on the Sandy Hook Hoax. Zionism Run Amok Must Be Contained

December 20, 2013
This is the definitive video that exposes Sandy Hook as the massive hoax that it was. And most likely nobody died. But it is like a false flag, against gun owners and against an armed citizenry. I was for gun control until I learned about this evil and wicked Zionist scam.

My natural father was Jewish and I am adopted, but I oppose Zionist/Neocon/Bankster control of the United States. It must be opposed by all of us. This hoax means that the warning by Israel Shahak that the press of the USA would do the will of the Zionists is true. Shahak was a Jewish hero. I wrote about it here.

Be armed if you choose to be, but be peaceful, my friends. We can beat this by refusing debt, by living multigenerationally if necessary, and by not spending all our money. That will force the cabal to pay us more and help us more, but only if we stop the hiding of money offshore by the uber rich.

Besides no tears on and on with everyone of these actors, you will find out things that will make you wonder in…
1 comment
Read more

December 19, 2013
I will say upfront that I am not an expert in Russian affairs. But a Business Insider comment section and an article in Haaretz have opened my eyes to the influence Zionism has had in the Russian economy.

The article itself is pretty lame. You can glean a little but not a lot. The comment section should win a prize for literature, however. I will post a few of the comments here to inform you as to what is happening, what even Harretz has admitted is going on with the Russian Oligarchs. The first comment is sarcasm at its best although people must realize that most Jews do not act this way. Zionist power is corrupting, and has created havoc in Russia after the collapse of the Soviet Union:  I was moved to tears by this horrible tale of Mr. Khodorkovsky thrown in jail, and wish to thank BI for bringing this travesty to light (with…
Post a Comment
Read more

December 18, 2013
Bernanke lied twice on his last news conference as Chairman of the Federal Reserve.

1. He lied when he said that the Fed did not see the housing bubble coming. That is just false. I wrote about it here:

In September, 2007 the Fed that supposedly was clueless issued this ominous warning:

At its September meeting, the FOMC lowered its target for the federal funds rate 50 basis points, to 4-3/4 percent. The Board of Governors also approved a 50 basis point decrease in the discount rate, to 5-1/4 percent, leaving the gap between the federal funds rate target and the discount rate at 50 basis points. The Committee’s statement noted that, while economic growth had been moderate during the first half of the year, the tightening of credit conditions had the potential to intensify the housing correction and to restrain economic growth more generally. The Committee indicated that its action was intended to help forestall some of the adverse effects on the broader economy that could othe…
Post a Comment
Read more

Proof Sandy Hook Was a Fraud. Heslin Was More Than 6 Years Older than Pic 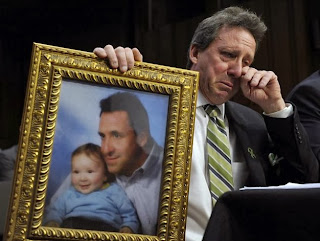 Contrary to the propaganda put out by Israel's supporters, Israel is NOT supported by the majority of the world's Jewish people. Ariel Sharon does not speak for all Jewish people. And being anti-Israel is not "anti-Semitic"
Post a Comment
Read more

Any Efforts to Disarm the Citizens of the USA is Likely Zionist in Nature. Hitler Rises in the New Zionism. - News - Bubblews

December 14, 2013
Any Efforts to Disarm the Citizens of the USA is Likely Zionist in Nature. Hitler Rises in the New Zionism. - News - Bubblews

Weapons are like a deterrent to bad government behavior. I do not advocate using them to solve differences. But I do advocate the right to bear arms.
Post a Comment
Read more


Henry Blodget said the banksters did no crimes. I say everything they did was a crime.
Post a Comment
Read more

December 13, 2013
Press and Senate Said Little About the Netanyahu Racism in Not Attending the Mandela Funeral - News - Bubblews

So, apparently it is ok for Netanyahu and Israel to be racist but no one else? How about if no one, including Israel, should be racist. After all, Jews were victims of the Holocaust and should be the last people to be racist. And most are not. But the Zionists who want middle east domination apparently are racist, and Netanyahu proved it by not attending the Mandela funeral.
Post a Comment
Read more

December 12, 2013
No offense to pigs. But Rand Paul and Benjamin Netanyahu are racist pigs. Rand Paul is racist because of his hatred of the 1964 civil rights act. Libertarians want racism to be a civil right. Rand Paul is sort of a libertarian.

Netanyahu didn't want to go to the funeral of Nelson Mandela. That is because he is practicing Apartheid against the Palestinians. He is a racist. He is an obvious racist.

So now we know why Rand Paul spent time in Israel and is so gung ho to support Israel. Racists flock together.

Dean Heller supports Racist Israel even after Netanyahu fails to attend Mandela's funeral. Heller must not realize that what is being done to the Palestinians is APARTHEID. A two state solution with some dignity for the Palestinians is essential to world peace.

Yet Netanyahu doesn't want peace, and he doesn't want a two state solution, and yes, he is an arrogant Zionist. Even most Jews in the USA hate the occupation. It is time we treated Netanyahu like the racist that he is.

I am ashamed to be served by a senator who loves racism. It is sick.
Post a Comment
Read more

The Intercept: Rob Kall: 'Not in My Jewish Name.'

Rob Kall wrote a peace that shows he is a Jewish guy who hates Zionism and what it has become. The occupation of the Palestinians, the killing of them, and the killing wars in the middle east are immoral and Jews in the US should stand against that behavior.
Post a Comment
Read more

Unemployment benefits average 300 dollars per week. It puts folks barely above the poverty line. It is cruel to end unemployment in states that have high unemployment when the promise was to help out during this horrible credit crisis, not caused by the workers who lost their jobs.

Every time Rand Paul opens his mouth he is a dick. That is the way he is. He is a dangerous bankster lover, regardless of what people think. He loves them. He wants them to get more wealthy and the rest of us to get poorer. That is how he is.

Rand Paul is a wicked man. The sooner people realize it the better off they will be.
Post a Comment
Read more

I Posted Good and Important Questions to a Zionist Blog and the Questions were Deleted!

December 05, 2013
I posted these questions to a Zionist blog and the post was deleted. These Zionists are very dangerous people when they refuse to answer questions like these:

Adina, I have a few questions for you. First, are you aware that Obama arms muslims in accordance with the neocon plan for world domination known as the Yinon Plan? So he is accused of being a muslim because he only partially embraces the Yinon Plan for regime change in the middle east. He draws the line at Iran. And the Zionists don't like it. So here are my questions for you:

2. Are you familiar with the Yinon Plan before I wrote the first question?

3. David Ben Gurion said a NWO would emerge where Jerusalem would be the seat of a world court. Do you, as a Zionist, seek this NWO and Israeli domination as did Ben Gurion? His interviewed appeared in Look/Life in 1962.

Income Versus Wealth Inequality Which Is Worse? - Business Insider

I have been arguing that wealth inequality is much worse than income inequality, which is why we need an occasional wealth tax. But no one listens. Too bad for the USA on that one! Check out the charts which show a massive wealth inequality of monstrous proportions.
Post a Comment
Read more
More posts