The Department of Homeland Security Is a Zionist Cabal. It Buys Up Ammunition to Establish Shortages and for Ultimate War?

May 23, 2014
The Department of Homeland Security was set up by Zionists to cover up the 9/11 conspiracy. The Department of Homeland Security is buying up ammunition to make sure shortages occur and buy hollow points for possible use on Americans. This may not be an active plan to hurt Americans with this ammo, however, I would not put it past these tyrannical madmen if massive economic upheaval ever visited the USA.

Now, I don't have proof that they will use these on Americans, but the DHS has access to PRIVATE armies. Some of those private armies were on hand at the Boston Marathon bombing. I thought that was strange, indeed. Obviously the coup that began with the assassination of JFK is not completed.

I believe that coup was led by LBJ but backed by Zionists who got their first gun control bill of 1968 passed after the assassinations of JFK and MLK.

Don't be fooled, as many liberals were fooled during the 1960's. I am a liberal for gun rights. I view the efforts of the DHS and of the internal agencies of the United States government as being potentially hostile to Americans. Americans have already died on 9/11, in the Boston Bombing where some actors were obviously there, but some may have actually been killed. Here is a statement from an insider who believed some were really hurt at the Boston Bombing but that it was planned by government. I do not know if it is true, but it seems quite sincere. Just click on the picture to enlarge it:

Indeed, if people really died, this is a false flag, and a nasty one as well. So, what was the purpose? Limiting gunpowder apparently is the purpose, which also allows the limiting of rounds of ammo that contain gunpowder.

If you add the knowledge that Sandy Hook was a hoax, it is all just very evil and disturbing that our nation has descended into new lows of treatment of its citizens.

See also articles about the Zionist nature of Homeland security here and here.

Disclaimer: Zionism is a multiracial cabal that seeks world domination and a preeminent Israel over world affairs. Being anti-Zionist is not being anti-Semite. My natural father was Jewish and I was adopted at age 3 months. I believe the rank and file of Jewish people, especially in America, are useful to Zionists but are also expendable if the opportunity arises to expend them on the cause of Militant Zionism. Militant Zionism is not the new Zion spoken of by Isaiah.

Update: Now the prosecutors are saying there was no evidence of gunpowder on the boys at all at the Boston bombing. Well, that is because DHS built the bombs, silly. Here is a comment from Business Insider that sums it up for me:

I swear everything I hear coming from the media then I hear from my coworkers that ran the marathon then what the FBI reports all is different. I think there was a bad government move here trying to overlay their " lets keep people in fear, blame it on muslims, and they'll be willing to give up their rights all in the name of protecting the homeland" narrative. It's so old and done.

911 allowed the gov to change the entire industry of air travel and created an insane amount jobs and $ with the TSA. I mean they can feel up children and it's legal?

It's pretty obvious the FBI is hiding something here. I don't want to go all conspiracy theory here but why life about the bomb drills that were occurring at the finish line during the marathon?

1) just about everyone at the marathon (including my coworkers) said there were bomb dogs, there were guys in military jackets doing drills, there were the same dudes that keep surfacing in indie photos with the skull hats that all had those blue remotes that were determined as radiation detectors. Then even over the PA they announced it to the public that drills were going on to not alarm anyone.

The FBI flat out denied that any of this was going on. Then 2 months ago DHS said "oh yeah there was training going on"

The fact that this guy hasn't been convicted yet is bonkers....then again it sounds like it's all speculative and circumstantial...Every time Dzhokhar makes a "confession" some police or FBI agent hears it but then they never have a recording or eye witness or anything to substantiate it.

Remember when they said Dzhokhar was admitting to everything...then the transcript comes out and he was just pleading for an attorney for 4 horus and wasn't talking about the bombing at all....Or when the cell phone text message transcripts came out they were supposedly him joking about blowing stuff up...then they are just his friend saying "dude there is a photo of you on TV" and him responding "lol nice joke" because he had no idea or reason to be on tv. Then the conversation evolved into him joking saying "oh no I'm going to be in trouble haha"...It was all a casual conversation where they applied It it the bombing.


And here are pictures showing that the three cops at Sandy Hook were also undercover cops at the Boston Bombing! 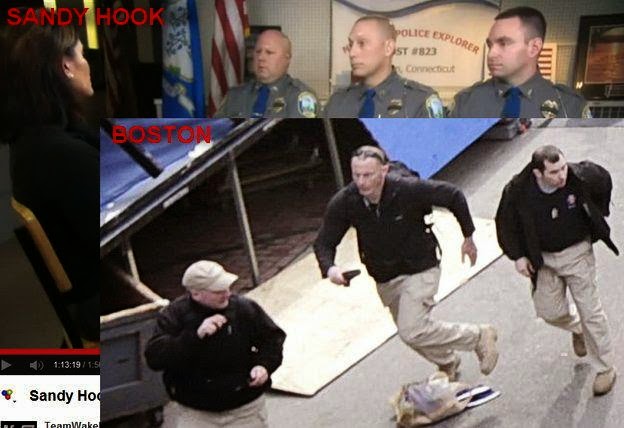