Globalism Gone Berserk: The Three Way Tussle for Khazaria in the Ukraine.

Before reading this please consider I have Jewish roots. I have both North African/Yemenite Jewish roots and Ashkenazi Jewish roots based on testing at Gedmatch. I oppose antiSemitism completely, and support tolerance towards all peoples. But do not support Zionism as a political


This is probably the most important single political statement I have ever made but the research backing Israelis linked to Khazars is wrong:


Interesting (article), but we need to understand what is going on here. We have Ukrainians who are fascistic, opposed to Zionists who want to occupy most of the Ukraine. The Israeli research shows that many Israelis have a connection to the Khazars. So, we have a three way fight for the Ukraine. We have Israel, who wants a Second Israel, we have the Ukrainian nationalists, and we have Russians. The Ukrainians who kicked out the Russians, and the Russians know full well who is the most dangerous player in this tussle, the Zionists!

[Since the above quote, research has disproved the Ashkenazi connection to ancient zkhazaria!

Also, a small Jewish group in the Ukraine has  reached out to the fascistic right wingers, and have sought a fusion of the two! This has been accomplished through the leadership of Ukrainian oligarch, Ihor Kolomoyskyi, who is a citizen of the Ukraine, Israel and Cyprus. The Israeli research discussed below shows a good percentage of Israelis being connected to Khazaria. I disagree with one thing about the research. I believe Jews can trace their middle east roots by DNA.

Don't be deceived. Israel has planned to or has already sent weapons to the fascists and Putin has warned Israel to abstain from this arming or more casualties will be the result. Israel has no other reason to fight the Russians in the eastern Ukraine except for eventual occupation of said territory.
That alliance between the fascists and the Zionists may backfire if the fascists realize that they will be devoured as well, by the Zionists!

And they will be devoured, and will made into prisoners like the Palestinians. Or they will be "spirited across the border" in the historic words of Zionist founder, Theodore Herzl. The new Khazaria will trump all.

And that is how it will be if they trust the Zionists who will lie to them and then turn on them. Reuters wants people to hate the fascists, while Israel provides arms to the revolution. That is because if the revolutionaries don't give in down the line, Israel will turn on them in the end.

I hate all bigotry, but what is going on in the Ukraine does not lend itself to a civilized interpretation. There is a power struggle and bigotry on various sides will stoke the flames of nationalism. If the Zionist win, Russia will eventually fall, or WW3 will be the legacy.

Here is Khazaria, where the Russians defeated the Khazars long ago. Click on the picture to enlarge: 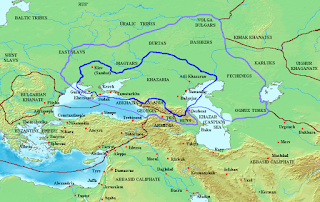 Zionism is a very multiracial cabal worldwide, but is very racist and bigoted, with little or no tolerance in Israel itself.  Most American Jews and non Jews are more tolerant than Israel will ever be. We have a better system of life than Israel does.Israel wishes to mold the US into a bigoted nation, so that we will go to war with anyone Zionism chooses.

Finally, I support national sovereignty, but not bigoted nationalism. The New World Order of the globalists is not the answer, nor is Donald Trump, and both are a threat to freedom.

The above article is based on bogus research. Israeli research has been debunked by other Jewish researchers.

High ranking Zionist official is a source of propaganda about Russia, saying Europe is threatened, which is, of course, absurd: http://tabletmag.com/jewish-news-and-politics/170735/josef-zissels-yivo
devoured by zionists fascists israel khazaria khazars new khazaria politics in the Ukraine. russians the ukraine wicked zionism zionism