September 21, 2015
My article discusses banks replacing the GSE's and was first published on Talkmarkets:

Big banks have been fined for manipulating LIBOR, fined for manipulating the CDS swaps markets, and are accused of rigging treasury markets for government bonds. These same banks have been seeking to replace the GSE's, Fannie and Freddie, and everyone knows that they have lost the trust of the American people. Bethany McLean has said that a decision should come soon on what to do with Fannie and Freddie.

Most of these banks are primary dealers for the Fed, creating markets for treasury bonds and have been accused of rigging the auctions for bonds as well!  I reported on this scam, and Bloomberg reported that interest rates had been pushed up significantly for bonds, as alleged in the lawsuit.

None of these bank should ever be given the power to assign government guarantees for loans because the temptation for manipulation of interest rates is simply too great if this lawsuit is proven and if we are serious about past manipulations. Apparently the folks bringing the lawsuit used the same methods to determine auction fraud as was used in determining the swaps scam, which led to over a billion dollar fine.

The European banks may already have the power to grant government guarantees in Europe. For example, Royal Bank of Scotland has a loan guarantee program for the low deposit loans in the UK. Low deposit means little down or maybe even no money down.

No one is saying that RBS wants to do this here and is only given as an example. But certainly, the US big banks want to be the administers of various loans that they can affix government guarantees to. This is proven fact as reported by the New York Times.

As bad as the GSE's were, they did not originate the bulk of loans that failed. The private sector did. Bethany McLean speaks of most of the mortgages going through Fannie and Freddie for securitization. However, the originations of most of the loans came from Wall Street.

Bethany McLean is a former Goldman Sachs employee. This is the same Goldman Sachs that was called out by the New York Times article mentioned above in seeking part of the GSE business.

Wall Street bears the brunt of blame for the housing bubble. This chart proves it and we can add this to the reasons above that granting the big banks the business now done by the GSE's is just misguided: 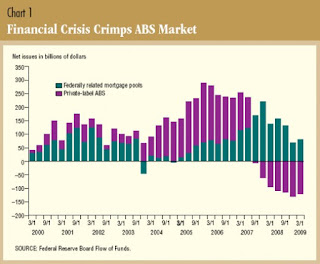