Does Neo-Fisherian Economics Cause Fed to Bark Up the Wrong Tree?

July 29, 2016
This article was first published by me on Talkmarkets: http://www.talkmarkets.com/content/economics--politics-education/does-neo-fisherian-economics-cause-fed-to-bark-up-the-wrong-tree?post=95888&uid=4798

So, here are issues facing the Fed:

If the Fed raises interest rates, the banks will receive the interest payments that should be remitted to the treasury, to the taxpayers! That will be a serious problem. I wrote that the Fed is predisposed to keep interest rates low. One of the reasons is this very problem, that the Fed cannot afford to pay the treasury if rates are raised. That interest will go to the banks and increase as rates are raised because of the 2.4 trillion or so dollars of reserves now held by the banks.

Well, since the Fed will have to pay the banks higher interest on reserves, the Fed cannot raise rates too high.  This is why the Fed cannot let the economy grow faster. In fact, the Fed has political reasons for not being able to raise interest rates. The political reasons relate to the anger of congress if the interest, which amounts to 70-90 billion dollars per year, is not remitted. That would be stealing from the taxpayers to pay the banks. Congressmen could lose their jobs over this issue. They will go along with the cabal most times except when their jobs are at stake! 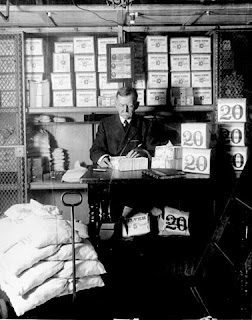 Banks have never had this level of excess reserves before, except for the Great Depression, so that raising interest rates under normal times never resulted in more money going to the banks.

And we know the Fed is afraid that if it doesn't pay the banks, the 2.4 trillion dollars of excess reserves could be loaned out at 24 trillion dollars, 10 to 1, and cause the Fed to lose its control of an overheated economy entirely. By not paying the banks, it could force the banks to lend at rates that are very low. We know what happened to the S&L's when inflation nullified the profits on their loans. The Fed cannot allow the economy to overheat with all these reserves getting in the way. Big inflation is not a likely scenario but the Fed will always protect against it.

The Cleveland Fed is aware of the dangers of large excess reserves, but adopts a New Monetarist position of just sitting and waiting:

Does this mean that the Federal Reserve should consider a major policy change that would remove some of the excess reserves as a safety measure? Such a measure might include raising the reserve requirement, charging interest on excess reserves, and removing liquidity from the system.

Here is where the more distant history of the Great Depression provides a cautionary lesson.

In 1936, US banks’ reserves had accumulated to record levels. Although there had not been a dramatic increase in the levels of loans, the Federal Reserve decided to “play it safe” and reduce the flexibility of the banks’ options for using the cash by increasing the reserve requirement. Banks responded by dramatically reducing their loan portfolios. Milton Friedman and Anna Schwartz argued that this action caused the 1937 recession (A Monetary History of the United States, 1867-1960).

So the Federal Reserve has no easy policy choices, particularly in the absence of a large body of accepted theory on how banks can be expected to handle their oceans of cash under changing conditions. Perhaps the best thing to do is what they are doing, that is, to adopt an extremely watchful stance and wait.

While I think high interest rates are impeded by the massive demand for long bonds in the derivatives markets, causing those bonds to behave differently than in the past, Scott is generally right about inflation causing higher interest rates, not the other way around. Taking the opposite view, the Neo-Fisherians believe higher interest rates are the cause of higher inflation. That makes no sense to the market monetarist. But there is one instance where it could make sense.

The only time that higher interest rates could cause higher inflation, in my opinion, is if banks decided to lend a lot more once rates floated above the zero lower bound. If rates were more normal (we are far from normal), it is possible that banks would lend more.

The Fed likely is afraid of allowing banks to lend out their excess reserves at very low rates because inflation could ruin them as it ruined the S&L's back in the last century. Rates were thought to be high back then, but inflation hit big and Volcker raised rates higher than thought possible, destroying the S&L's.

But we are not there, we are in a low rate environment now. So there may be a thimble full of truth coming from the Neo-Fisherians and the New Monetarists, in my opinion, that banks may lend more to the real estate sector if rates were a little higher, as we are now bumping along the zero.

The questions then are these, will this rise in rates:

1. destroy world economies that are fragile, like China. China needs a weaker dollar and thus low US interest rates. Japan needs a stronger dollar and the Fed to raise rates.

2. cause house prices to rise or fall,

3. cause the treasury to be left out from remittances,

4. cause a real boost to the American economy and inflation above the 2 percent target or a slowing of economic activity?

Perhaps the only really effective barking will be real helicopter money that does not increase the debt of the treasury. It seems that the Fed is a lot more fearful of barking up the wrong tree than are our canine friends.