July 19, 2016
This article was first published by me on Talkmarkets: http://www.talkmarkets.com/content/currenciesforex/japan-is-practicing-tranche-warfare-abe-is-frightened?post=95599&uid=4798

Japan is the perfect example that shows  the real economy does not matter anymore. Japanese Prime Minister Shinzo Abe likened the current crisis of low commodity prices to that of the 2008 crisis that took down Lehman.

Japan's banks are playing the worldwide casino in a big way. It appears that these banks are just too big for the Japanese economy and they are reckless in their investing practices. Really reckless! When was the last time some of you heard about tranches? More on that at the end of the article. 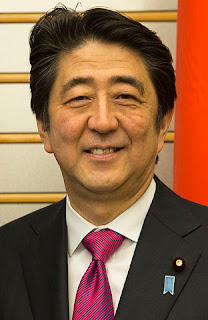 So, we have to understand that Japan imports raw materials and processes them into finished goods. As of the article publication these were the major imports procured by Japan:

Primary exports are as follows:

So, we can see that even some petroleum imports are turned into a major export, plastics. You would think that most nations that import a large portion of raw materials, commodities, would want cheap imports, cheap commodities.

But not Japan. It is true that many Japanese products are now produced outside of Japan, making the real economy that much more complicated. But above all, Japan fears a Lehman type meltdown. The real economy becomes secondary to the banking economy. Japan's banks may face a crisis over wrong sided bets on raw resources.

And it appears that the BOJ intervened in currency in order to push prices of commodities, namely oil, upward from the bottom. And of course, the Japanese don't want a stronger Yen, as that ultimately hurts exports. But protecting the banks is more important than exports.

A stronger Yen hurts the banks even more than the exports. Proof of that was the Japanese bank stocks plunge in February, 2016 in reaction to European bank price declines over low energy prices.

It appears that Japanese banks bet big on trades they think will win. They bet big on French bonds back in 2014:

If you want to make money investing, you have to take the largest position you can take on the most important event of the year – that’s how you win," said the Tokyo director of fixed income at a European brokerage. Japanese investors “think the ECB's easing is the biggest event of the year.”

If Japan is now worried about a Lehman type episode, perhaps the nations' leaders understand that the higher commodity prices are unsustainable. Why else would they worry so much about it? They fear that without global help in speculating on commodities, that they may find themselves on the wrong site of the trade?

Large Japanese banks are making big bets on troubled US brands, desperately seeking yields. They take risky tranches of the debt and convert them into derivatives at home. Wow.

They’re snapping up pools of the debt that have been sliced into pieces of varying risk and return, and converted into yen-denominated securities.

Sliced up debt that is in little pieces is called a tranche. Tranches are back in a big way for Japanese banks. It is likely that Japaneses banks are taking the more risky tranches searching for yield. No wonder Abe is frightened!

Then, add to the bank behavior the fact that Japanese investors are taking the low floating side of bets, in order to guard against inflation (that may never come), and you see that this could turn ugly fast. Does this mean that the banks themselves, who are selling these loans, are taking the fixed, high side of the bet? Are they betting on inflation?
I am sure we are only looking at the tip of the iceberg when it comes to Japanese bank investments.

It just looks like the Japanese banks are playing a very dangerous game of investing, exercising a very greedy form of investing. It is all or nothing with them. When it turns to nothing, Abe panics.


The Japanese have too many too big to fail banks. They are too powerful for the nation to handle if major meltdowns come. Japanese banks are the biggest cross border lenders in the world. They care about their loans and bets, and apparently so does the government, more than about the health of the Japanese import/export economy.