Donald Trump Is President. What Will He Fix? Hold Him to It.

November 08, 2016
So, the Aryan Supremacist and cult leader with unseemly urges has won the presidency of the United States. Yet, in his acceptance speech, he promised to be a president of all the people. So, what did he promise and what can we hold him to?

Here is the most important thing: will he stop the neocon quest for world domination or will he hate Muslims so much that he plays into the hands of the neocons?

Here are other promises we will see that he keeps or not.

1. He promised to make allies pay for our protection. Let's see if he carries through. It could put the world in danger trying this stunt, but he promised it.

2. He said he would create many jobs. Let's hold him to it. We need more jobs and better paying jobs. He hates high tech, where those jobs exist. I am no fan of the abuses of globalization, but closing America off to trading partners will mean his once deplorable supporters could be the first ones laid off.

3. He said he would not go to war in the middle east. Let's see if he won't. We hope he does not succumb to the temptation for war.

4. He said he would investigate 9/11. I believe it was a conspiracy as well, so let's see if there are any arrests.

5. He said he would fortify border security. Let's see if he does without destroying our relationship with Mexico. 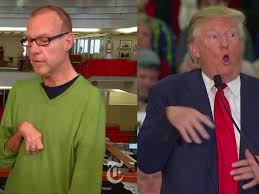 Here are a few things I hope he doesn't do.

1. I hope he doesn't deport 11 million illegal aliens. That is inhumane.

2. I hope he doesn't raise the hate level because minorities feel hated by him.

3. I hope he doesn't hurt US security with his friendship with Putin and his threat not to protect nations that don't pay him for it.

4. I hope school children will see less bullying but he is a bully himself, so we will see.

5. I hope his economic plan does not turn the coming recession into another Great Depression.


But here we are, with Donald Trump calming the stock market and I explained it by this comment on my fellow Talkmarkets blogger, Phil Flynn's article:

So Trump is just Cheney reborn. Deficits don't matter. As long as Wall Street and energy companies get their fix, it is business as usual. Didn't Trump run on a different platform than that?


Truth is, as long as Wall Street and big energy get their tax breaks, the deficits will go up. I can't imagine that is what the supporters formerly known as deplorables wanted, can you?

Trump at least must get the Fed to raise short term interest rates. That may push long term rates up a bit. They cannot go up much but it would help retirees, and pension funds, and insurance companies so they won't raise rates so much. The theory behind raising rates is called neoFisherism.