Showing posts from March, 2017
Show all

Bannonomics, Not Trumponomics Will Crush the Economy 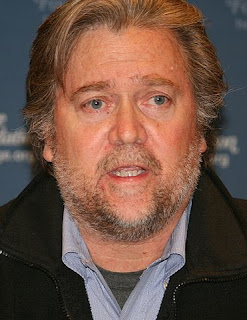 This article was first published by me on Talkmarkets:  http://www.talkmarkets.com/content/economics--politics-education/bannonomics-not-trumponomics-will-crush-the-economy?post=113638&uid=4798 Steve Bannon threw major confusion into the markets with an interview at  Hollywood Reporter  where he said: "I’m the guy pushing a trillion-dollar infrastructure plan," said Bannon in the interview. "With negative interest rates throughout the world, it’s the greatest opportunity to rebuild everything. Ship yards, iron works, get them all jacked up. We’re just going to throw it up against the wall and see if it sticks." This is essentially a call for the New Normal on steroids. The problem with this is that it is the opposite of the euphoria pushing the markets up, a strong dollar and higher interest rates! It is the opposite of the  Trumponomics analysis given by Wilbur Ross.  But Bannon would have to allow the recession that is expected as we are at the end
1 comment
Read more 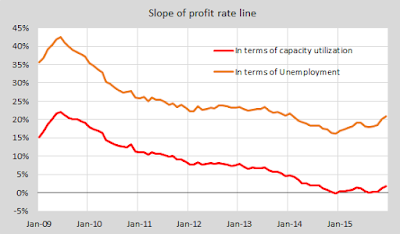 This article was first published by me on Talkmarkets:  http://www.talkmarkets.com/content/education/edward-lamberts-recession-equation-warning?post=113119&uid=4798 Edward Lambert, who has contributed to the study of effective demand , has produced an equation that indicates recession. The Cobra Equation predicts recession, as profits fall in relation to wage increases. It will be displayed at the end of this article. It results in the chart below, with the red line showing profit rate based on capacity utilization and the yellow chart showing profit rate based on unemployment. They are remarkably similar. Utilization of capital reached its peak at the end of 2014 as you look at the chart below. The significance of this chart is that the Fed should have attempted to normalize rates while the business cycle was on the upswing, showing the yellow line descending on the chart. By the time the peak of the profit cycle hit in late 2014, the Fed should have normalized rates. Dr. La
Post a Comment
Read more

Trump Yellen Gunfight at the Not So O.K. Corral

March 13, 2017
This article was first published by me on Talkmarkets:  http://www.talkmarkets.com/content/bonds/trump-yellen-gunfight-at-the-not-so-ok-corral?post=113017&uid=4798 In the real gunfight at the O.K. Corral, which took place in Tombstone, Arizona in 1881, a long time feud between the Earp brothers and a group called the cowboys came to and end. The Earps were the sheriffs and the cowboys had threatened them over illegal activities they were engaged in. The Earps, though some were wounded, survived and the cowboys were routed. We hope that the new gunfight is more civil, with weapons being used confined to words and economic ideas. The end remains to be seen. The gunfight has not yet occurred. I believe it will. The first shot that will be fired is Yellen's fast draw on interest rates. They will likely be raised in December. Getting ahead of inflation is important if Trump attempts to gain a massive stimulus package. The issues that lead to this gunfight boil down to full e
Post a Comment
Read more
More posts