April 30, 2017
This article was first published by me on Talkmarkets: http://www.talkmarkets.com/content/global-markets/great-recession-coppolas-in-betweeners-and-central-banks?post=116100&uid=4798


Frances Coppola is a blogger and economist in the UK. She has some great insights. She has made comments that monetary policy has not been really successful. In fact, she takes UK central banker, Mark Carney, to task over the defense of monetary policy in the United Kingdom.

While Carney and the UK government made mistakes, compared to other central banks it did better. Carney defends the Bank of England by saying:

"Simulations using the Bank’s main forecasting model suggest that the Bank’s monetary policy measures raised the level of GDP by around 8% relative to trend and lowered unemployment by 4 percentage points at their peak. Without this action, real wages would have been 8% lower, or around £2,000 per worker per year, and 1.5 million more people would have been out of work."

The UK guaranteed loans to small and medium businesses. The US government and Federal Reserve did no such thing. That was a huge mistake and led to mass layoffs in the USA.

We know monetary policy between the subprime crash of 2007 and the HELOC crash in 2008, the USA did not have the Fed intervention in buying subprime paper. We know that subprime paper in the USA was forced back onto the balance sheets of the banks and then not supported by the Fed. It appears that the Bank of England did support continued lending in a way that the Fed did not.

"Fiscal policy quickly came under severe strain as tax revenues plunged, the costs of social benefits rose sharply, and the huge bills for too-big-to-fail banks came due. Since then sustained austerity has reduced the fiscal deficit from around 10% of GDP in 2010 to around 3 ½ % today. While necessary, this has, on average, subtracted around 1 percentage point from demand each year. Over that time, structural policies have boosted participation in the labour market but have been unable to return productivity growth to anything resembling its historic average. For seven years, in the face of severe headwinds to growth, monetary policy has been the only game in town."

Coppola believes this statement is true as far as it goes. Moderate Austerity helped to reduce the deficit in the UK after revenues plunged in the Great Recession.

She says that in the Eurozone, the austerity was not accompanied with a sufficient monetary easing. The common currency forced nations like Spain to suffer high unemployment without the benefit of a robust monetary policy. Of course, this does boost the economic arguments for BREXIT even today.

The ECB simply did too little to late, even later than the Fed's time dalliance. The ECB still faces the consequences of pockets of high unemployment and political unrest. The US has the problem of high unemployment in rural America. The Fed fixed cities, finally, but didn't fix the rural counties. But as I said above, the FED did allow the total destruction of subprime and a liquidation occurred in the USA that clearly did not occur in the UK even though liar loans (called self certified loans) were rampant at the time in the UK.

Carney rejects the argument in favor of statistical proof that the poor and the wealthy were helped in the post Great Recession reflation in the UK: 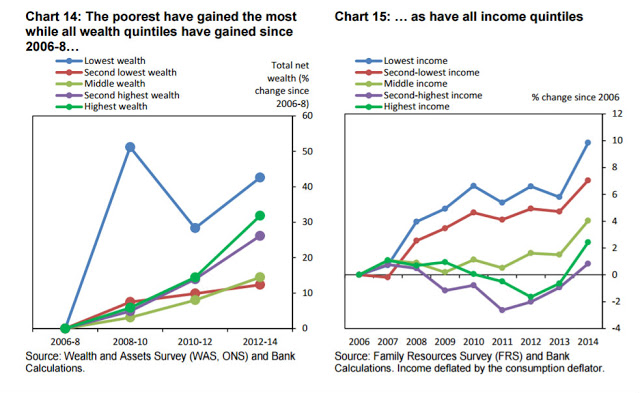 Coppola has another take, saying the middle class, the In Betweeners, have not benefited in the same way from the reflation. She makes the point that Carney says that the wealth buildup for the lowest quintile after 2010 came from brutal deleveraging of property debt. Coppola does not believe it. She says wealth buildup for the poor was a function of shedding debt in the Great Recession aftermath:


"The poorest 20% didn't have mortgages, they had credit cards and payday loans. And in the deep recession after the financial crisis, many of them defaulted on them. Some had their possessions seized to pay off debts. The few that might have owned houses in 2006 don't, any more. Now, they are free of debt and are beginning to build up savings, perhaps with the help of charities such as Stepchange."

That is hardly a success for Carney's central bank policy, that the poor simply shed debt and that made them richer. Coppola goes on to say the monetary policy actually worked to keep fewer poor from defaulting, and that was ultimately a drag on the wealth of the poor.

So, there is much more in the Coppola argument concerning the UK. Asset inflation hurt those without assets, everywhere, not just in the UK. It hurt the middle class which abandoned housing and then was hurt by the rising cost of living that accompanied asset buying reflation.

But all in all, compared to the dreadful job that the US Fed did in bowing out of the subprime housing market, even that which was soundly underwritten in many states, the Bank of England handled the crisis and treated the homeowners and small business owners with much more respect than the Fed treated homeowners and small business owners in the USA. The Fed has to answer to this chart, and this never happened in the UK. The question is why did the Fed do what it did to cause this dreadful destruction of the subprime commercial paper market and ultimately to the meltdown of the entire US economy? 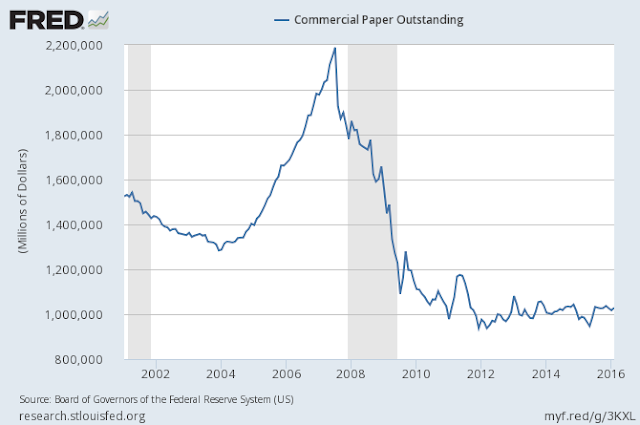 The banks were forced to take back the commercial paper, and they froze up lending to all but big business in the US. That did not happen in the UK. The UK's subprime losses were small, and they came mostly from US investment:

"The sub-prime losses in Britain were far less than those announced in America and at some investment houses on the continent. So far the biggest losses have been declared by Citibank, which has written off $24 billion, followed by UBS with $18 billion."

The truth is this, the BOE was a true lender of last resort. The Fed, was a reluctant, and ponderously slow lender of last resort and the combination of Fed and government did not lend to small business or save well written loans, even subprime loans outside the crisis states of California, Nevada, Florida and Arizona. The Fed and US government action came too late to stop a severe recession. The austerity in the EU was too intense, and the ECB did not act as a lender of last resort. The UK protected UK citizens, homeowners, and small business in a way that the Fed and the ECB did not.