June 25, 2018
Donald Trump is pushing for bilateral trade agreements. He believes that the United States can take on any nation one on one, using its leverage to forge advantageous trade agreements with other nations.

The arguments have been made that Germany ultimately became aggressive in its worldview because it needed raw materials and it had an economy that was overheated by war preparation. Certainly it took other things, such as racism, white supremacy, and the desire to unify all Germans to push Hitler to war with Poland. But the essential economic foundation for war was most likely an overheated economy and the need for raw materials.

Bilateral agreements were no longer enough to sustain German growth. The limits of growth had been reached. The country suddenly had become too prosperous, and in order to continue the path of prosperity, it needed to become aggressive. Historians will argue endlessly about how much economics had to do with Hitler's aggression. But surely his economic decisions did not help.

The US is likewise pushing the limits of unemployment, while attempting to heat up the economy. The Trump administration is perceived as being xenophobic and dabbles in racism. Like the Germany of old, the US wants the undesirables removed, as Trump has come out and said all undocumented immigrants, at least 10 million of them, must be removed immediately without trial or due process.

That would seem to be a recipe for a weaker labor market if the plan is carried out. Similarities with the Third Reich abound. 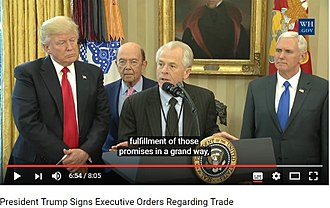 Obviously, there are differences between historic Germany and the USA under Donald Trump and his trade advisor Peter Navarro, shown speaking in the photo above.

The USA may not have to go to war for more resources, although there are some rare materials that need to be procured from other nations. Trump could offer bilateral agreements to make sure those resources remain available. Going to war with our neighbors seems to be abhorrent to most Americans.

And even if Donald Trump invaded Mexico or Canada, who would stop him? The Eurozone is not powerful enough to stop him. The Asian governments are not interested in stopping him. Russia is powerful enough, but it would likely not be in the Russian self interest to stop him. Certainly Mexico and Canada could not stop him.

So, a world war is unlikely even if Donald Trump were to behave very aggressively against our neighbors. Trump knows that America is a law unto itself. Of course that sort of power has always proven to be dangerous to those who live under the shadow of totalitarianism. The capacity for US totalitarianism is greater than any capacity that has existed before.

But do not think that Germany was weak. According to observer Balogh:

It has often been contended that the burden of military preparation in Germany and Italy is so heavy that their economic structure must break down in the long run; that therefore the democracies merely have to sit back and wait until the impoverishment of these countries produce internal social troubles. Nothing can be farther from the truth. Rearmament was achieved in the main by reemploying labor and capital rendered idle by the world crisis. So great was the productive power of the country that—at least until the general mobilization which prepared the way for the attack on Czechoslovakia—they could even afford some increase in consumption. …
The German economy, as far as it could break down, has long ago broken down, namely it broke down in 1931, and what a breakdown in the collective economy means I simply do not know, except that some people are either purged or put in concentration camps.

Germany had idle capital leading up to the military overproduction. The US does not, unless it has plans to use immigrants coming to our shores. That does not seem to be what Trump is advocating. Growing an economy that already is nearing full employment seems to be less doable than in pre WW2 Germany.

America will not be the same nation if the above scenarios come to pass. There are weaknesses that are forseen and unforseen. For example, Trump could default on US bonds. He has threatened to do so before. If he were to cut China off through massive tariffs, US bonds could become a hindrance to the economic plans of the administration without foreign buyers to take up the slack.

The rest of the world could boycott all things America.

And that is likely to be the unknown in all of this planning that comes from a prewar German playbook in so many ways. What would the world, the individual consumers in the world, do? Could the US survive without exporting much? It would seem as though the nation would have to stop the internet, stop instant communication, stop living in the modern world. Organizing against the USA would cause greater belligerence. And perhaps the US would find itself invading China, and a world war could happen.

There is a certain arrogance of power that comes from perceiving that you are the top nation. The Vietnam war was a lesson in the arrogance of power. Those who planned Vietnam as a no win war of containment never factored in the reaction of the American people to the war over time.

Trump has pledged to fight only trade wars, not so much real wars. But without even talking about the impact on the financial system that uses bonds as collateral in all manner of deals, the dangers could escalate in the foreign policy arena if the Trump tariff plans are carried through to the end.

And like in Vietnam, will the American people adversely react to Trump policy and higher prices? The experiment planners like Navarro have no way of really knowing if adding hundreds of dollars to the price of an IPhone will enrage America.

Nations can play dirty in this war against the world. Trump business can be isolated and become unprofitable. Apple and other large multinationals could find themselves with shrinking balance sheets. They could be boycotted. Credit crises could make the Great Recession look like a celebration.

It could be that a militant economy could result in a temporary overheated economy, and Trump would look good to all the people. But then what? Over time, Moon Kil Woong's comments at Talkmarkets could very well come true:

Trump does not view trading partners as partners, and that is the main problem. He looks at the situation like a kid, as a win lose battle. If such is the case, then there is no reason to trade. If such is the solution, get ready to live in a much weaker America that is not as wealthy, powerful, or economically vibrant. This is not making America great again, it is sticking your head in the sand and saying you are better off than we were when we were looking forward and leading the world.


Dirty politics could poison world communication. And Trump could jump from trade wars to real war. Anyone who asked about why nuclear weapons couldn't be used has explored all the options of his power and people should wake up and take notice. It does not appear that Donald Trump is in a mood to compromise about tariffs. He wants to win, and we could all lose in the end.