The Teetering State of Retail

July 31, 2018
Retail is experiencing problems. Those problems relative to auto sales and restaurant activity which have been covered by the main stream media. Make no mistake, these sections of retail are leading indicators of problems ahead. They need to be watched carefully and they could cause fear and risk off in stocks.

There are mixed signals regarding the state of retail, especially regarding job openings. According to economist Tim Duy, job openings seem to be strong:

But there is a definite slowdown in hiring and this is showing a bad trend in retail:

So, layoffs have not started. But that doesn't mean that retail is not slowing. It is. And for the auto industry, the sales force is making fewer commissions. That is like a partial layoff. Waiters and waitresses make money through tips. If there are fewer customers and fewer tips, those act as a partial layoff as well.

We can see the trend happening over years, that labor is being crushed by the capitalists, eventually resulting in distress to capitalism itself: 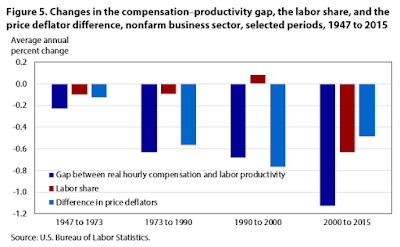 The Fed is talking about reducing its balance sheet, which is could cause a contraction of the money supply, and raising interest rates, which could invert the yield curve. There is really not enough money on main street, but too much money in certain markets. It is a risky thing for the Fed to take down the bubbles in stocks, etc, when the consumer is so constrained. On many levels the Fed is too tight already.

Edward Lambert has said that he expects a recession in 2017. We are teetering on the brink of recession based on these leading economic indicators. We aren't there yet, but Lambert said this in February:

And sure enough, we are seeing sectors struggle in March and April. Tim Duy has shown us that more sectors are now contracting than are expanding.

One thing that must be pointed out is that wages in warehousing have declined significantly. For those counting on Amazon and others to bail retail, and the economy, out, realize that those jobs are low paying compared to historical warehouse work. Amazon has one of the highest turnover rates of any company, meaning that the ability of workers to accumulate wealth there is very low. No, retail is in the doldrums and Amazon is not the answer.

This article was first published by me on Talkmarkets: http://www.talkmarkets.com/content/education/the-teetering-state-of-retail?post=131979&uid=4798