Showing posts from January, 2019
Show all

Repo Watch Looking for the Next Economic Crisis 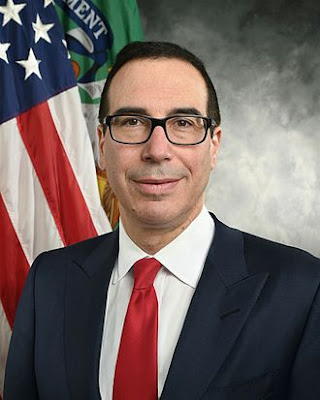 This article was first published by me on Talkmarkets:  https://talkmarkets.com/content/financial/repo-watch-looking-for-the-next-economic-crisis?post=146100&uid=4798 Repo watching is an important economic indicator. If repos don't roll over, credit freezes up. It is sort of like looking at a giant glacier, waiting for the big collapse on the edges. You watch and watch and watch, until you are bleary eyed, but then the action happens in a split second. There are a couple of websites that deal with repo watching, including here at Talkmarkets. Jeffrey Snider, contributor to this website, is a serious repo watcher. Looking into how the system works in simple terms can help understand the economic indicator effect of repo rollovers. There are comments below about how Steve Mnuchin fits into this process. Trump Secretary of Treasury Steven Mnuchin But briefly we can look at the history of repo watching, as Bear Stearns was the ultimate victim of not rolling over repos
Post a Comment
Read more

This article was first published by me on Talkmarkets:  https://talkmarkets.com/content/economics--politics-education/kashkari-reveals-dark-secret-fed-plan-for-wages?post=145383&uid=4798 Minneapolis Federal Reserve President Neel Kashkari just revealed a Federal Reserve secret. That secret is that the Fed raises interest rates and slows the economy primarily to clip wage growth. The Fed has other reasons as well, but Kashkari said this, and it reveals a chilling and systematic destruction of labor's share of GDP: “I think they are making different decisions because they are very worried about accelerating inflation,” specifically an acceleration in wages, Kashkari replied. “I call this, and I mean this with no disrespect, a ghost story,”  I leave it to others to determine if worry about an acceleration in wages is a ghost story at this particular time. However, it doesn't appear from the following chart that there should be much of a worry about wage growth, thoug
Post a Comment
Read more

Tim Duy's Fascinating Take on the State of the Economy 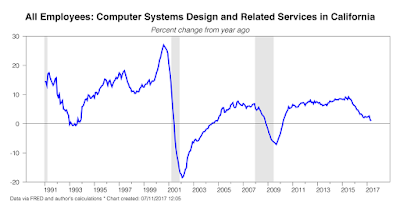 This article was first published by me on Talkmarkets:  https://talkmarkets.com/content/education/tim-duys-fascinating-take-on-the-state-of-the-economy?post=142523&uid=4798 By Permission By Permission Tim Duy has a fascinating take on the state of the US economy. I will hopefully try to make sense of his viewpoint and offer another point of view. First, notice his charts above showing the tech economy in what appears to be a slight contraction. The professor makes this  interesting conclusion: High asset prices alone do not imply that a fall in those prices will bring the economy down. Those asset prices need to be linked in a very tangible way to a fairly significant and widespread imbalance in the economy for their decline to bring about a broader economy collapse. Duy makes the case that a tight Fed brought down the economy in the early 1990's, not a fall in asset prices. One wonders why the Fed is interested in clipping asset prices if they won't impact t
Post a Comment
Read more

January 13, 2019
This article was published to my personal blog at Talkmarkets:  https://talkmarkets.com/contributor/gary-anderson/blog/us-markets/trump-administrations-strange-response-to-ford-relocating-to-china?post=139558&uid=4798 Ford is going to establish its new Focus plant to China. The plant was going to Mexico, a nation that has prospered recently, causing fewer Mexicans to seek economic survival in the United States. One would think that is a good thing and should be encouraged. So it is perplexing to me that regarding the Ford Focus, Donald Trump's administration said this: “The Ford decision shows how flexible multinational companies are in terms of geography,” Commerce Secretary Wilbur Ross said in response to Ford’s news. “I believe that as President Trump’s policies and reforms take hold, more companies will begin to locate their facilities in the U.S. as several German and Japanese automakers already have.” The perplexing thing about this is that Donald Trump has spen
Post a Comment
Read more

January 13, 2019
Update: After the takeover, so far, Whole Foods has dispensed with Amazon's online return policy and does accept poor quality vegetable returns. This article was first published by me on Talkmarkets:  https://talkmarkets.com/content/services/amazons-jeff-bezos-doesnt-understand-female-shoppers?post=139096&uid=4798 While it may seem like a bold statement, that Amazon's CEO Jeff Bezos does not understand women shoppers, the truth is in some areas he doesn't. When it comes to grocery shopping, there are a few things that he will have to understand. With the acquisition of Whole Foods, it is expected that a delivery service could arise. For some people, this could be an important service. Amazon may increase the Whole Foods market share. There is no doubt about it. But it is not without significant risk. But, Bezos underestimates the power of the female shopper. I know people with disabilities who shop in store and online, for store pickup. These services are avail
Post a Comment
Read more
More posts