Showing posts from March, 2019
Show all

Saving the Economy: NGDP Targeting for the People

This article was first published by me on Talkmarkets:  https://talkmarkets.com/content/bonds/saving-the-economy-ngdp-targeting-for-the-people?post=158919&uid=4798 Nominal GDP Targeting, or NGDPT, is the cornerstone economic doctrine of the school of economics called Market Monetarism. NGDPT is the solution for the Fed who was watching inflation in 2008 when the Great Recession creeped up on them unannounced. Those watching NGDP, like Scott Sumner and his friends, understood that the economy was in trouble. The Fed had no clue because it was tracking inflation which had not declined while nominal GDP was in steep decline. So, after the crash, the Fed indeed began to buy assets, through QE, as a means of bringing up asset values. And yet, inflation has still trended below the 2 percent target. So, the Fed has inflated assets, while wages and inflation overall have stagnated. While this asset purchasing is not in and of itself NGDPT, it is approved of by Market Monetarist Sc
Post a Comment
Read more

For All You Inflation Fearmongers, Dr Lambert Has an Answer

This article was first published by me on Talkmarkets:  https://talkmarkets.com/content/economics--politics/for-all-you-inflation-fearmongers-dr-lambert-has-an-answer?post=157380&uid=4798 We can see by the latest reading on the FRED chart that the velocity of money continues to decline. Even with Trump's reflation, we had a sliver of an uptick in the third quarter of 2017 from 1.425 to 1.427. But the chart still looks dismal: Dr Edward Lambert of Effective Demand Research has an answer for those crying inflation in a response to a question on his article comments: ...   If money supply times velocity matches growth in employment, there would be no inflation. But it seems that M*V not only matches growth in employed but doubles it.   The only answer I can think of is that M*V is measured upon number of employed, and capacity building.  Labor wages are stagnant. Supply-side is optimized and maximized. Inflation is muted to the point that it equals increases in employed
Post a Comment
Read more 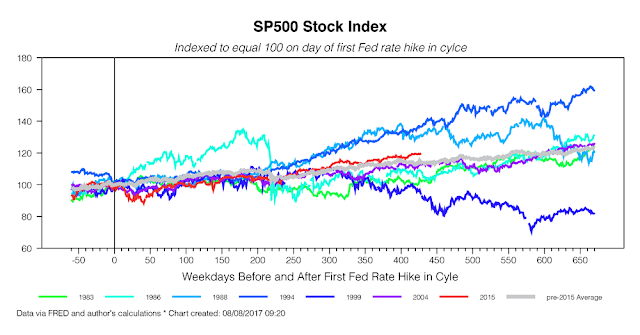 This article was first published by me on Talkmarkets:  https://talkmarkets.com/content/education/tim-duy-stocks-wont-crash-look-for-these-indicators?post=146888&uid=4798 Tim Duy says stocks won't likely crash. He has a chart showing the behavior of our current stock cycle. And he has a set of leading indicators to look for down the road. Tim is very consistent in his pronouncements. He does not see stocks taking the economy down: But if not market valuations, what should be the focus on investors? My view is that they should be watching for signs that, at a minimum, earnings growth will falter or, probably more importantly, that the economy is set to tip into recession. I tend to think it is more likely that the economy takes the equity market down with it than the opposite.  There is a rule by which stocks operate according to Professor Duy: The general rule is that if the economy continues to grow, then it is more likely than not that stock prices rise, even if the
Post a Comment
Read more

March 09, 2019
This article was first published by me on Talkmarkets:  https://talkmarkets.com/content/stocks--equities/the-great-artificial-intelligence-bubble-and-scam?post=148063&uid=4798 The Great Artificial Intelligence bubble and Scam has made inroads into all facets of American life. The scam of the self checker at your local grocery store is a prime example, and certainly the same arguments can be made about self driving cars, and other artificial intelligence. These all seem to be an attempt to sell unproven and overhyped technology to business and individuals to make money, whether the general concept itself is valid or not!  Before we look into the economic ramifications of this scam, turned bubble, we can review some weaknesses already made evident. Because of Amazon's interest in artificial intelligence and Bezos's purchase of Whole Foods, we should check out the grocery scene more carefully. We know from personal experience that if you have produce, checking out be
Post a Comment
Read more
More posts