April 04, 2020
This article was first published by me on Talkmarkets: https://talkmarkets.com/content/economics--politics-education/the-lowdown-federal-reserve-bank?post=183282&uid=4798

I will go so far to say that, in the remembrance of Boz Scaggs' famous lyrics, it is a "dirty lowdown" Fed Bank. This blogger has been arguing here at Talkmarkets that the Federal Reserve is a conspiratorial bank, mispricing risk and liquidating the ill fated results of speculation from mispricing risk!

Well, now, George Selgin Phd., esteemed lead economist at the CATO Institute and the Alt M blog, has confirmed the conspiracy in a recent blog post. I will try to encapsulate the main points of his work while adding what I have written before on the subject in order to help clarify the issue.

First, Professor Selgin probably knows more about excess reserves than anyone else outside the Fed. His blog post begins with a view that the Fed is trying to sell how good interest on excess reserves (IOER) policy really was. The Fed work was adopted in 1912 and amended effective January 30, 2018 as perhaps a final statement on the matter.

Although the passage itself doesn't refer to interest on reserves, its purpose is to introduce a discussion devoted to singing the praises of that policy instrument. It's in light of that intention that the passage raises my hackles. For what the Fed's report doesn't say is that, when the Fed introduced IOER in early October 2008, it did so, not because it thought "monetary stimulus was necessary to address the significant economic downturn and the associated downward pressure on inflation," but because it was determined to prevent its then-ongoing emergency lending from having any stimulus effect, and from thereby becoming a source of unwanted upward pressure on inflation! IOER was, in other words, originally intended to serve as a contractionary monetary policy measure, just when monetary expansion was desperately needed. [Emphasis mine]

The chart below confirms it. I had written this well over a year ago:

Both domestically and in wholesale dollar funding to the Eurodollar shadow market, the Fed has failed to produce growth in the real economy because the expansion of the money supply is hidden in useless excess reserves that cannot be touched, not making its way to real lending, and real economic growth going forward. The new normal continues, some say by design.

Jeffrey P. Snider has said at his blogs that the IOER is just dead money, and I wrote above that he said it was not even base money. Well, Dr Selgin has just shown us that the Fed has indeed done a dirty deed by design! The Fed made it appear it was loosening monetary policy/providing accommodation, while all the while it was tightening! 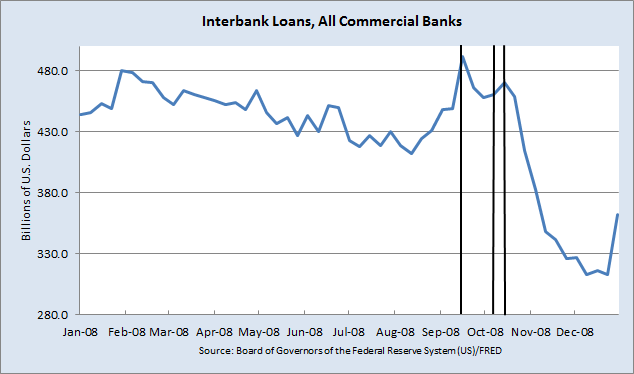 This chart refers to interest on reserves paid to the banks by the Fed. The interbank lending started to dive in late 2008 as the crisis hit, and Lehman failed September 15th, which is the first vertical line, but rebounded slightly until Bernanke started paying IOR. But then IOER totally put an end to much interbank lending, and plunged the nation into a Fed induced financial catastrophe not seen since the Great Depression.

Scott Summer reamed the Fed about IOR back in 2017 with this astonishing statement:


The decision to adopt IOR helped to prevent the Fed from achieving its policy goals, by making the Great Recession more severe than otherwise.  That’s not just my opinion; unless I am mistaken that’s the implicit message of Bernanke’s memoir, where he indicated that, in retrospect, the Fed did not move quickly enough to cut rates in the fall of 2008.
The world would be a better place today if the Fed had never instituted its policy of IOR in 2008.  I really don’t see how anyone can seriously dispute this claim.


The world would be a better place! And Bernanke knew he was liquidating and didn't care enough to stop it. It hasn't been the first time this liquidation has taken place. Try the Great Depression.

I believe it certainly pains George Selgin to see and expose this behavior as the nature of the Fed. Certainly, the Fed is incompetent, and behind curves and should do NGDP Targeting, etc, etc, etc. But all that does not explain the heart of the matter, that the Fed is indeed a conspiratorial dirty lowdown organization. It misprices risk and then liquidates the inevitable mistakes caused by the mispriced risk and speculation! It financially rapes main street when the cronies need to make a little money.

Moving on with Selgin's blog post, we see that he goes on to ream the Fed for saying that banks could find other safe assets that pay more than IOER. Selgin's relentless analysis pounds the Fed as he shows there are no safer assets than IOER! He says:


Stretch the notion as much as you like, you will never get "safe assets" to include even the safest bank loans. That is, you won't be able to do it unless you are a Fed official trying to claim that the Fed's IOER rate has been "far lower than the rate that banks can earn on alternative safe assets."
Nor is it possible to justify comparing the Fed's IOER rate — a rate on assets (reserves) of essentially zero maturity — to rates on otherwise safe longer-term assets...

Selgin blasts the Fed's interpretation of Regulation D to compare IOER to term rates rather than overnight rates. Overnight rates would be a far more accurate means of comparison and Selgin says the Fed is being self serving and close to "dishonest". He says:


Because the IOER rate once defined the upper limit of the FOMC's fed funds target rate range, and is now set 5 basis points below that limit, any interest rate that the Fed pays on reserves is bound to be lower than the Fed's primary credit rate. Thus the Fed has cleverly interpreted and implemented the statute in a manner that allows it to claim that it is obeying the law requiring that its IOER rate not exceed "the general level of short-term interest rates" no matter how it sets that rate, including when it sets it well above truly comparable market-determined short-term rates!


In my view, the Fed borders on the insincere, or rather, cynical behavior worthy of a sociopathic organization! A little countercyclicality in the fall of 2008 would not have hurt! But it was too much for the liquidating Fed to contemplate, and I think it just wanted to prune wages and drive people into treasury bonds. It will do so again and again if it thinks it has too, and much pain will result!

I think that Professor Selgin has done a service to those of us who, on every educational level, try to understand the Fed and its motives. I believe the Federal Reserve Bank is manipulative and conspiracy oozes from its "hallowed" walls, both on the front end and back end of crises. Seasoned professionals are beginning to inch towards that view as well.

And the Fed knows it can get away with this dirty lowdown behavior because the American public for the most part only thinks about politics instead of about political economics.

I know people in Nevada who committed suicide, left pets to suffer, left marriages, and the middle class was punched hard by the Great Recession. All for what? It was an attack on main street, plain and simple. It was an attack short of physical bombs but had, in many cases, horrible effects on families as if a bomb had struck. Just horrible.

In the meanwhile we are left with pure propaganda-like, or just ignorantly written articles like one by the Los Angeles Times where the author said the Fed took bold steps to boost the economy. Bold steps? Sorry, it wasn't that way at all. It never was meant to happen that way.

LIBOR Destroyed Subprime, But the Fed Deepened the Great Recession